Shares of Amazon spiked to an all-time high, up more than 7% to $1,633, in early trading Thursday after the e-commerce giant on Friday reported first-quarter earnings that crushed expectations. 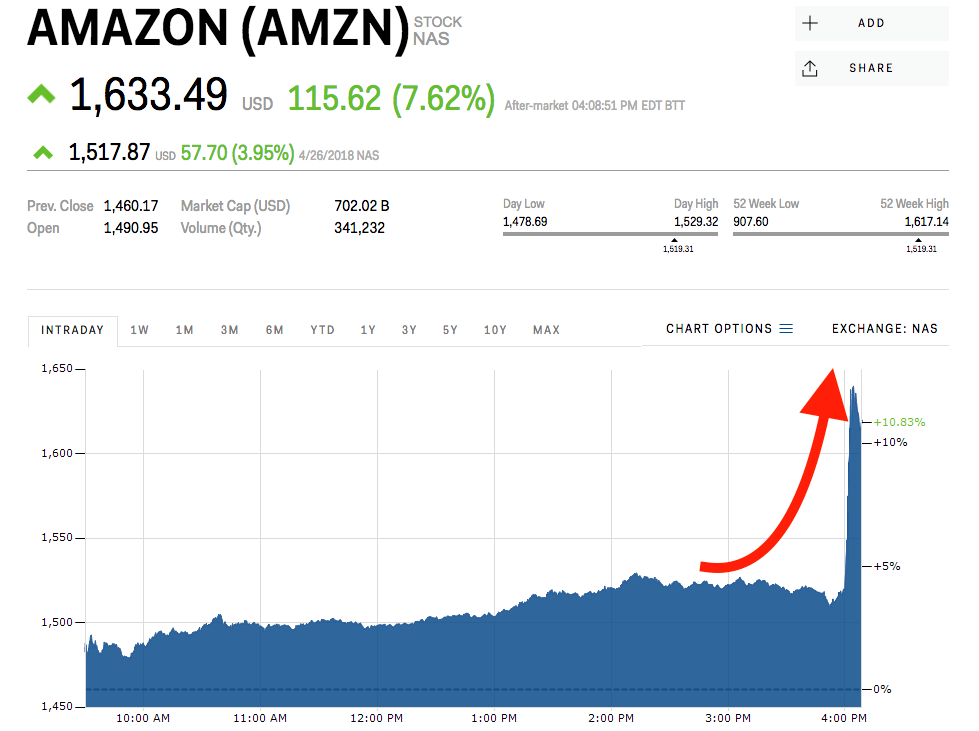 Here are the key figures:

Amazon saw strong gains from its North American retail segment, thanks in part due to Whole Foods, which it acquired in the second half of last year. Sales from that segment rose 46% year-over-year to $30.7 billion in the quarter. The segment posted an operating profit of $1.1 billion, which was nearly double the $596 million operating profit it recorded last year.

Whole Foods and Amazon’s other physical stores contributed $4.3 billion in sales for the segment. Without them, Amazon’s North American online sales grew by 18%.

More impressively, the company’s cloud business — Amazon Web Services — saw its sales grow 49% to $5.4 billion. Yet again AWS contributed the lion’s share of Amazon’s profit. The cloud business had operating income of $1.4 billion in the quarter, up from $890 million a year earlier.

Although AWS’s sales have grown at rates of 40% or better for at least the last six quarter, its pace in the just-completed period was the fastest over that time span.

“AWS had the unusual advantage of a seven-year head start before facing like-minded competition, and the team has never slowed down,” Amazon CEO Jeff Bezos said in a statement. “As a result, the AWS services are by far the most evolved and most functionality-rich … That’s why you’re seeing this remarkable acceleration in AWS growth.”

Post Views: 1,416
Type to search or hit ESC to close
See all results