Here are the winners and losers of the new tax law

The Republican tax law just signed by President Trump benefits most American taxpayers, at least until key provisions sunset. Those gains, however, still fall mostly to the wealthy.

That’s the conclusion of a look at the Tax Cuts and Jobs Act by the Tax Policy Center. 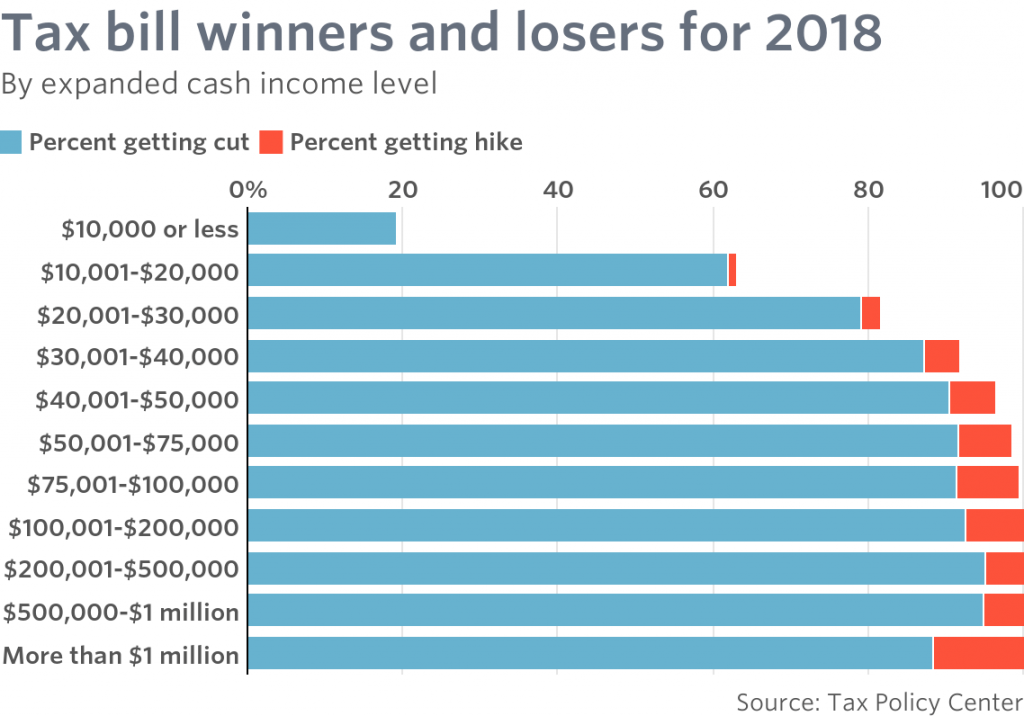 The good news is that there aren’t many who will pay higher taxes next year — about 8.5 million, compared to the some 143 million who will get lower taxes.

Things change however once 2025 rolls around. If no change is made, what were tax cuts will become tax hikes, even relative to current law.

A majority of Americans in a decade’s time will then pay higher taxes, including 69.7% of the middle quintile.

Republicans insist that they will not let the individual tax cuts sunset. However, that could take the total cost of the bill to over $2 trillion over a decade, according to separate estimates from the Committee for a Responsible Federal Budget. The bill as currently written has a headline cost of $1.5 trillion, with the final cost shaved by over $400 billion if faster economic growth is spurred.

Tax Policy Center analyzed the law using what it calls tax units, which includes those that both file and (like spouses) don’t file taxes. Expanded cash income refers to cash income plus tax-exempt employee and employer contributions to health insurance and other fringe benefits, employer contributions to tax-preferred retirement accounts, income earned within retirement accounts, and food stamps.

The Joint Committee on Taxation, which is Congress’s independent number cruncher, came up with similar numbers. They found the average tax rate would fall to 19% from 20.7%. The tax rate for those with an adjusted gross income between $50,000 to $75,000 would see their tax rate fall to 13.5% from 14.8%.

Post Views: 1,382
Type to search or hit ESC to close
See all results