Reports of the death of the sovereign-bank “doom loop” are greatly exaggerated.

Italian government bonds have blown up, with the yield on two-year notes skyrocketing by as much as 155 basis points on Tuesday to the highest level since 2012. Spreads on subordinated debts from euro-area financial companies, meanwhile, have jumped in sympathy as Rome’s political turmoil reverberates across markets.

The Markit iTraxx Europe Subordinated Financial Index, a gauge of credit default swaps tied to junior debt sold by the region’s lenders, has surged to the highest in more than a year. 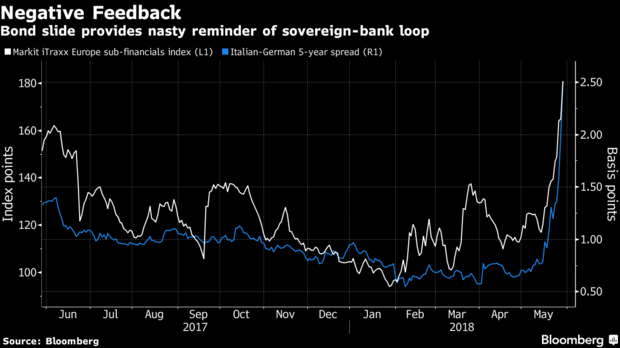 Sparked by the collapse of populist efforts to form an Italian government and the prospects of a fresh election, the selloff evokes memories of the vicious link between government and financial-institution debt markets that was at the heart of the euro-zone crisis.

“The past week has seen a sharp turn of events in Europe,” Ben Emons, chief economist at Intellectus Partners LLC, wrote in a weekend note. “Not only did Italian and Spanish sovereign spreads see a large widening, the move in Italian/Spanish bank spreads was of equal magnitude. The last time that correlation was tight was during the 2011-2012 euro crisis.”

While the region has beefed up fiscal and banking co-ordination, a comprehensive integration plan to curtail the periphery’s systemic risks and heal the sovereign-bank feedback loop remains a distant prospect.

“If the stress were to increase from here and that further tightens correlation between sovereign spreads and bank spreads, the only way the ECB can break the loop again is with (large) liquidity injections,” wrote Emons.

For Peter Tchir, the New York-based head of macro strategy at Academy Securities Inc., the picture is potentially more encouraging.

He says conditions are in place to spur a short-squeeze rally in the credit default swap market for senior bank debt as investors have hedged exposures via these broader indexes en masse. As such, the jump in the region’s CDS may reflect “bad positioning in an illiquid market” rather than a material repricing of credit risks.

“If the CoCos behave as designed, you could have substantial losses there and minimal impact higher up the capital structure,” he said. “I don’t think we are there yet, but it is something I’m watching while trying to ascertain how serious the current situation is.” 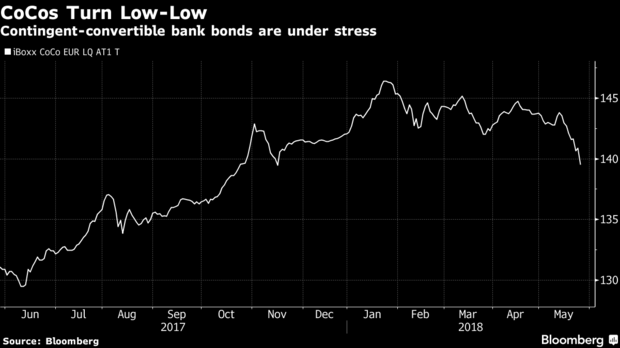 Post Views: 1,998
Type to search or hit ESC to close
See all results