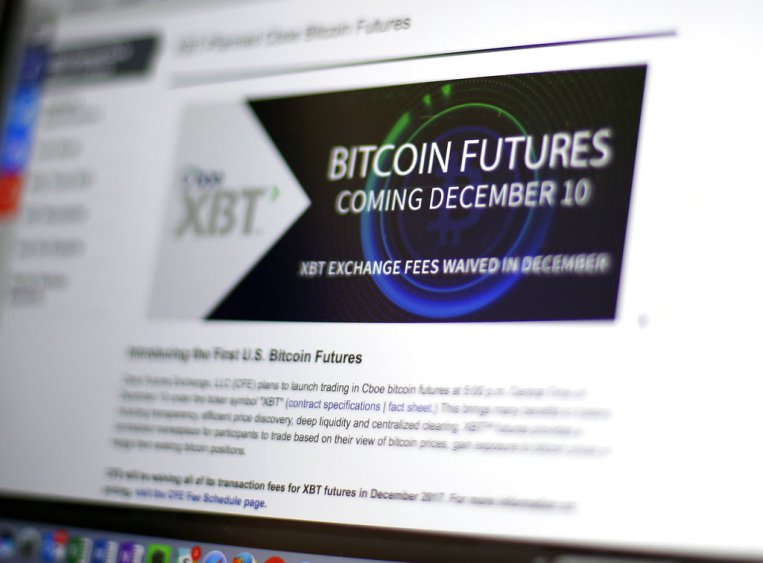 One day after a major price plunge and following a volatile week, the Cboe Global Markets kicked off the highly-anticipated bitcoin futures trading on Sunday evening on the Cboe Futures Exchange (CFE).

After bitcoin futures started trading, the cryptocurrency spiked more than $1,200, while the Cboe website became inaccessible.

“Due to heavy traffic on our website, visitors to www.cboe.com may find that it is performing slower than usual and may at times be temporarily unavailable. All trading systems are operating normally,” a Cboe spokesperson told FOX Business in a statement.

With Sunday’s launch, Cboe beat fellow Chicago exchange and rival CME Group (NASDAQ:CME), which announced plans to start its own bitcoin futures contract on Dec. 18. Cboe’s bitcoin futures are trading under the ticker symbol XBT, and are based on the auction price from digital asset exchange Gemini, created by the Winklevoss twins in 2015. The first full day of trading will be Monday, and the exchange said trading will be free through the month of December.

Though it’s seen wild swings, bitcoin has been super-hot in recent weeks, currently pricing at $15,400 as of 6:15 p.m. Eastern Time, according to the latest data from Coindesk. Earlier in the week, the cryptocurrency reached an all-time high above $17,000 before falling to as low as $13,152 late Saturday night.

However, some business leaders and investors are not yet set on the currency itself. Take Jamie Dimon, CEO of JPMorgan Chase (NYSE:JPM), for example, who called bitcoin a “fraud” while speaking at an investor conference in New York in September.

“The currency isn’t going to work. You can’t have a business where people can invent a currency out of thin air and think that people who are buying it are really smart,” Dimon said, adding that if any of the company’s traders were trading bitcoin, he “would fire them in a second, for two reasons: It is against our rules and they are stupid, and both are dangerous.”

BlackRock (NYSE:BLK) CEO Larry Fink also had some harsh words for bitcoin, calling it an “index of money laundering,” at a conference hosted by the Institute of International Finance.

Warren Buffett, the “Oracle of Omaha,” also isn’t sold on the cryptocurrency, warning that it could be a bubble that’s getting ready to burst.

But, some still have faith that bitcoin is the way of the future, including PayPal co-founder Peter Thiel, Overstock.com (NASDAQ:OSTK) CEO Patrick Byrne, and of course CME Group’s CEO Terry Duffy.

“The recent volatility in these markets has underscored the importance of setting these levels and processes appropriately and conservatively … we remain apprehensive with the lack of transparency and regulation of the underlying reference products on which these futures contracts are based and whether exchanges have the proper oversight to ensure the reference products are not susceptible to manipulation, fraud, and operational risk,” Lukken wrote.

Concerns also have grown regarding the security of bitcoin after NiceHash, a mining exchange for the cryptocurrency’s customers, announced it had lost more than $78 million-worth of bitcoin after being attacked by hackers.

“We have not abandoned you guys, NiceHash CEO Marko Kobal said during a Facebook Live video on Thursday, a day after the hack took place. “Currently we are cooperating with local and international law enforcement and cybersecurity experts to fully investigate the scope of the breach that happened.”

The cryptocurrency was created in 2009 by an unknown person or people using the name Satoshi Nakamoto. Transactions are made online and without the involvement of middlemen, or in the case of the currency, banks.