There may be a “golden” lining to the recent historic tumble in General Electric Co.’s stock, as it has approached an important long-term chart level at a time when the near-term technical outlook suggests the worst may be over.

The stock GE, hovered around six-year lows, as it suffered a ninth straight monthly loss in November. That’s the longest such streak in over 45 years, based on available data on FactSet and Yahoo Finance going back to 1972. The company did not provide additional data.

The selloff accelerated over the last couple months, tumbling 17% in October, the biggest one-month selloff since the depths of the Great Recession, and 9.3% in November, as new Chief Executive John Flannery’s turnaround plan unveiled in November failed to assuage investor concerns.

GE’s retracement could be technically very significant, because it has nearly reached the last major target based on the Fibonacci ratio, made famous by a 13th-century mathematician known as Leonardo Fibonacci of Pisa. The ratio of 0.618 is also known as the “golden ratio” and the “divine ratio,” as it pops up throughout nature, such as in proportions of the human body, the DNA double helix and in shape of a Nautilus sea shell. 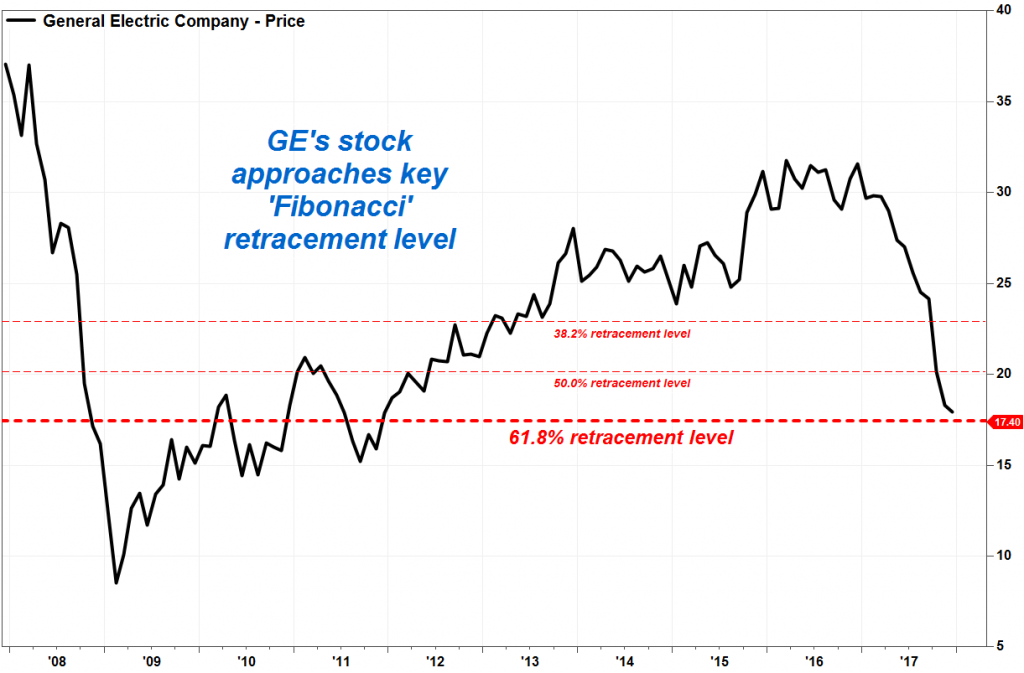 Many technicians have embraced the ratio, saying it can be either a key support level or the trigger of a larger move. The idea being, any retracement that surpasses 61.8% is no longer a retracement, but the start of a new trend in which the minimum target is a full retracement of the previous trend.

Given some developing bullish technical signals, the “Fibo” could very well be significant support.

“It’s possible that we have see the worst for GE from a technical perspective,” said Mark Arbeter, chartered market technician and president of Arbeter Investments LLC, in recently emailed comments to MarketWatch, although he added he would prefer to see more evidence before calling a bottom.

Some GE insiders seem to think a bottom is near, as a number of disclosed share purchases as the stock fell.

One bullish development is the spike in trading volume as the stock plunged after Flannery’s transformation plan. Arbeter said that resembled a “selling climax,” which would indicate those who were desperate to sell have already sold.

Volume is viewed by technicians as a measure of participation, so by itself, a sharp increase might help validate a move. But it’s important to look at volume changes in context. 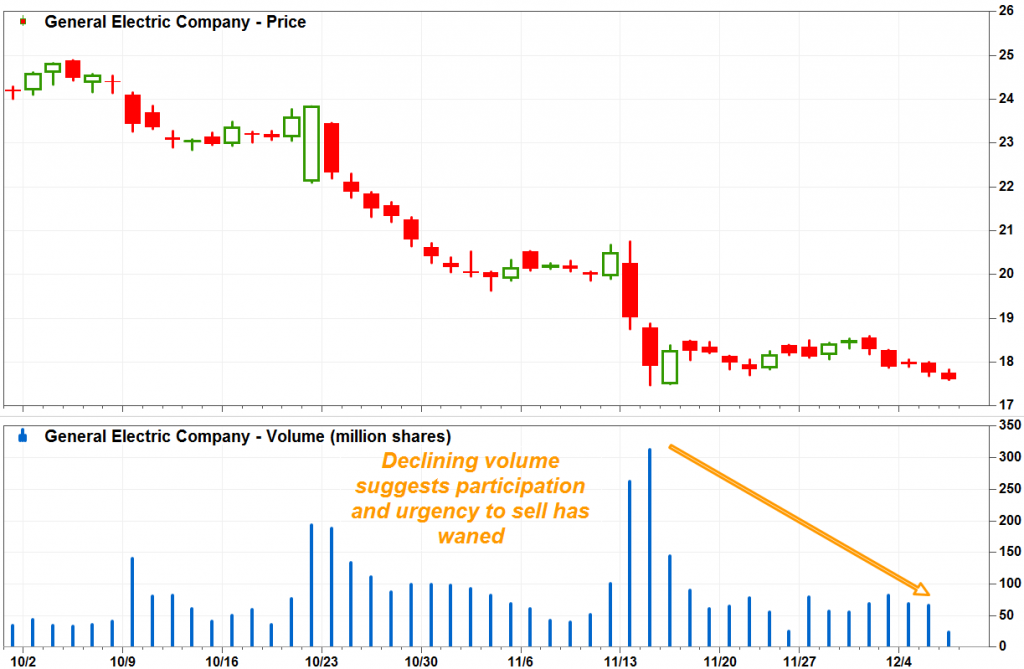 The takeaway is after the initial big selloff, subsequent weakness on declining volume suggests participation and urgency to sell has waned. Read more about price-volume correlation.

The stock slumped 0.6% in afternoon trade Wednesday, with volume down to 25 million shares about two hours before the close. Year to date, GE shares have tumbled 44% while the Dow has climbed 22%.

Arbeter also said the slope of the selloff in October and November–“straight down”–is typical of a “panic low,” coupled with the fact that the stock is “deeply oversold” on all time frames. He said the stock was recently as much as 30% below its long-term trend tracker, the 200-day moving average, which is the most since the financial crisis. 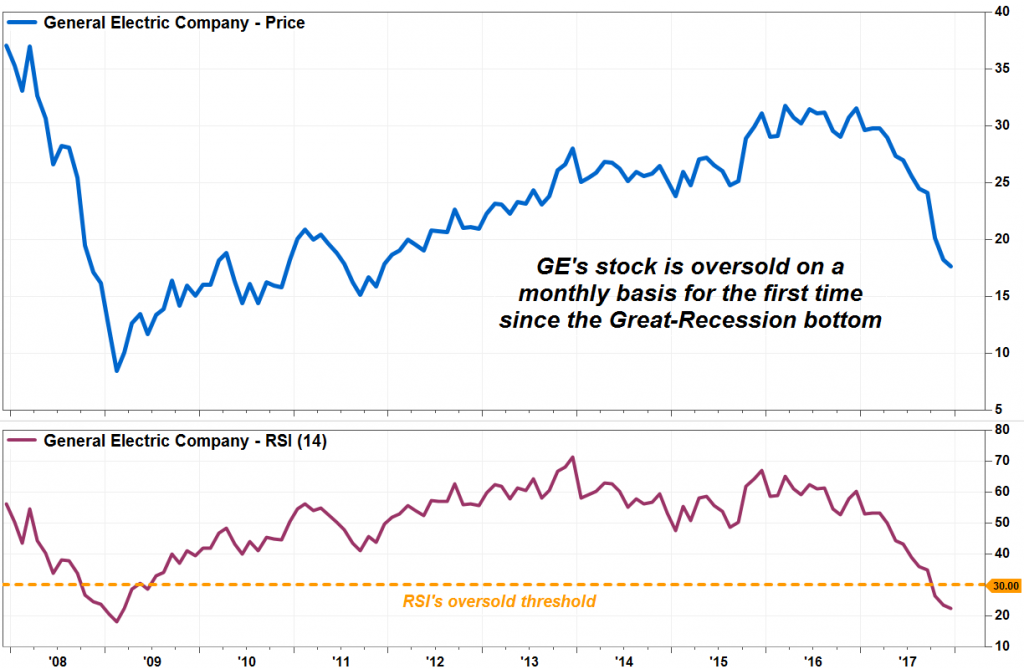 But while technicians can identify conditions for a potential bottom while the stock is falling, the only way to define a bottom is in hindsight, based on how the technicals shape up as the stock rallies.

In other words, stopping at support isn’t enough to call a bottom, it also has to break through resistance.

Many times, panic bottoms take the shape of a “V,” where a sharp drop is followed by a sharp rally. But so far, that hasn’t been the case, Arbeter said. “It’s possible that the share trace out some type of durable bottom that takes at least a couple months if not longer,” he said.

In the meantime, some upside levels to keep an eye on include the recent highs in the $18.50 to $18.60 range. As the century-old Dow Theory of market analysis explains, a downtrend reflects a series of lower lows and lower highs, while an uptrend reflects higher highs and higher lows.

Post Views: 1,303
Type to search or hit ESC to close
See all results