Goldman Sachs Group Inc. signage is displayed on the floor of the New York Stock Exchange in New York, U.S., on Thursday, June 2, 2011. U.S. stocks retreated, a day after the biggest slump for the Standard & Poor's 500 Index since August, as investors awaited the Labor Department's monthly report on employment in the world's largest economy. Photographer: Jin Lee/Bloomberg

In a note to clients published Tuesday, David Kostin and the equity strategy team at Goldman Sachs said they expect the S&P 500 will rise 11% in 2018 to hit 2,850 by year-end.

Goldman is the latest Wall Street bank to come out with a bullish call on the stock market for the year ahead, with Yahoo Finance’s Sam Ro detailing over the weekend that so far strategists at BMO Capital, UBS, Deutsche Bank, and Credit Suisse have each called for double-digit returns in 2018.

Goldman argues that what it calls “rational exuberance” will be a guiding theme in 2018, with the firm citing above-trend U.S. and global economic growth, low and slowly rising interest rates, and profit growth boosted by tax reform as tailwinds for the stock market. 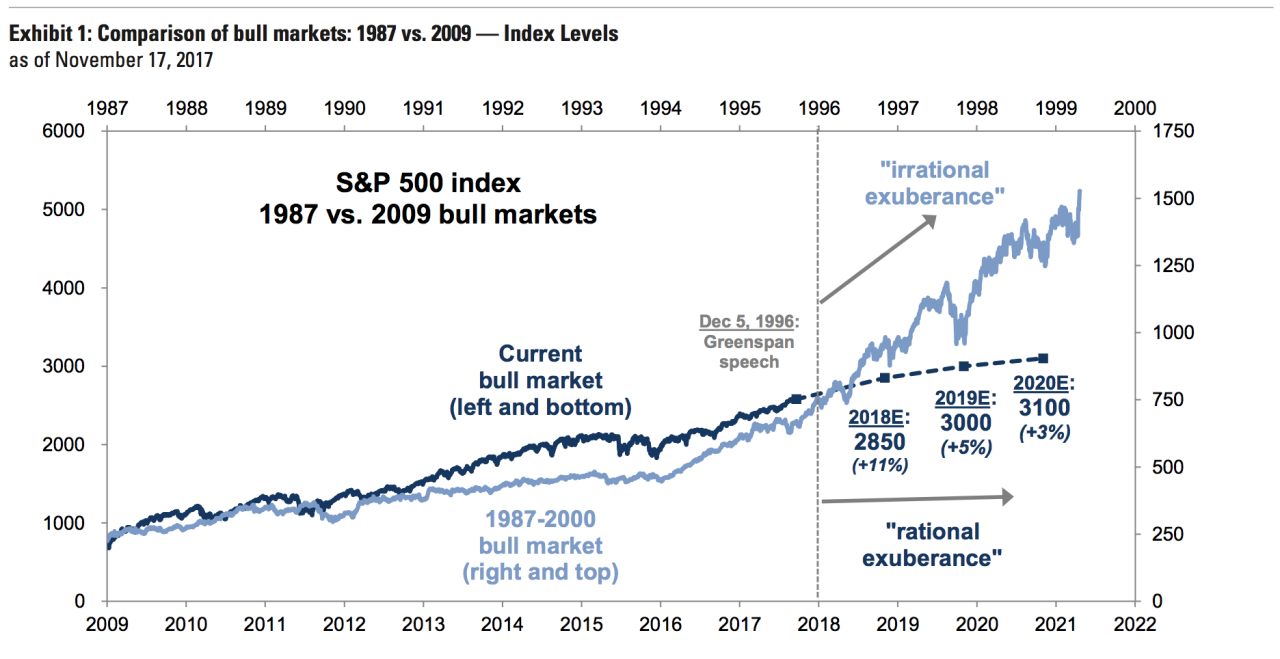 Through Monday’s close, stocks were enjoying one of their best years since the financial crisis with the Dow up more than 18% year-to-date, the S&P 500 up over 15%, and the tech-heavy Nasdaq up better than 26% so far this year.

Those who are concerned that elevated stock valuations will lead investors towards some sort of inevitable cliff are unlikely to find comfort in Kostin’s description of the current environment as “rational exuberance,” as this echoes the title of Yale professor Robert Shiller’s famous book “Irrational Exuberance,” released just before the height of the tech bubble.

Shiller’s title was taken from a famous 1996 speech given by then-Federal Reserve chairman Alan Greenspan, who asked, “But how do we know when irrational exuberance has unduly escalated asset values, which then become subject to unexpected and prolonged contractions, as they have in Japan over the past decade?” It took almost four years for the tech bubble to burst.

“From its December bear market low through 1996, the S&P 500 index delivered a total return of nearly 330% (17% annualized), just slightly behind the magnitude of the current rally,” Kostin notes. “Both economic expansions were long lasting (ultimately lasting 120 months in the 1990s while the current expansion stands at 100 months and counting). Subdued inflation contributed to the extended equity bull markets during both periods.”

Kostin notes that Greenspan was early in his concerns about the market, adding that the market more than doubled between his comments and the bubble bursting.

“The current equity market valuation is certainly stretched in historical terms but it does not appear unreasonable based on the high level of corporate profitability,” Kostin writes.

“Earnings drive stocks over time and should support the index rising to 2850 at year-end 2018, 3000 at the end of 2019, and 3100 by the close of 2020, representing a price gain during the next three years of 20%… An earnings-driven bull market is inherently rational for a fundamental equity investor.”

Post Views: 1,221
Type to search or hit ESC to close
See all results