A screen displays a Twitter and share price logo as it starts trading at the New York Stock Exchange (NYSE) on November 7, 2013 in New York. Twitter hit Wall Street with a bang on Thursday, as an investor frenzy quickly sent shares surging after the public share offering for the fast-growing social network. In the first exchanges, Twitter vaulted 80.7 percent to $47, a day after the initial public offering (IPO) at $26 per share. While some analysts cautioned about the fast-changing nature of social media, the debut led to a stampede for Twitter shares. AFP PHOTO/EMMANUEL DUNANDEMMANUEL DUNAND/AFP/Getty Images ORG XMIT: 187363780

Twitter’s Stock (TWTR) Rallies, Will Be Included In S&P 500 Index

Twitter’s stock (TWTR) traded 5% higher on Tuesday morning, after it was announced the company would replace Monsanto (MON) in the S&P 500, which is composed of large cap companies.

The stock eclipsed the $40 level this morning, which represents a 3-year high.

Simultaneously, Cascend Securities raised its Twitter (TWTR) price target to $45 from $40, which is a 19% increase. Bayer’s (FRA: BAYN) $66 billion acquisition of MON later this week will create the world’s largest agribusiness firm, while effectively retiring the Monsanto brand.

In analyzing the chart for TWTR, we can see the stock is still in the rising phase of its current market cycle.

However, it has now hit our target price zone, which is based on Fibonacci extensions. While the stock’s chart pattern remains strong, often a pullback occurs after this type announcement. 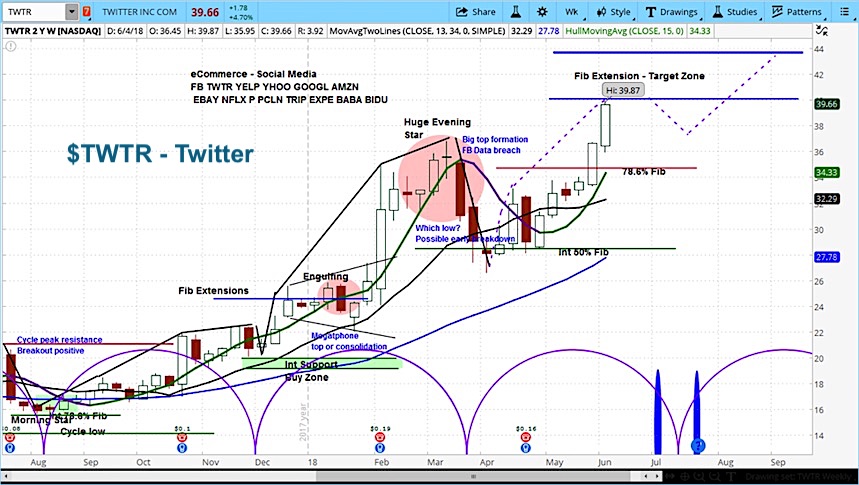 Post Views: 1,320
Type to search or hit ESC to close
See all results